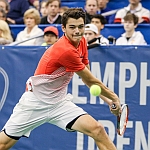 The 2016 Memphis Open final is set: American Taylor Fritz will take on world No. 7 Kei Nishikori, after the three-time defending champion sent off Sam Querrey, 3-6, 6-3, 6-3.

The first set was all Querrey as he used his infamous kick serve to start off the points and flatten Nishikori off the court with his big forehand. With a break to go up 5-3, Querrey rolled on to close the set.

Instead of maintaining the momentum that earned him the opener, Querrey began to try to serve and volley and mix up his approach to return points.  The crowd began to wonder whether the American was suddenly uncomfortable with his original game plan or confident enough to try something new against the defending champ.

Soon, many “backhand to backhand” rallies gave Nishikori the quick advantage to opening up the court during Querrey’s service games, leaving him on the defense. With his sixth ace of the match, Nishikori closed out the second set, 6-3, to go the distance with a decisive third.

The wheels of the “Querrey Express” started to fall off quickly in the final set, as he went down 3-0 within only 10 minutes. Casual backhand returns soon became a dilemma for the No. 4 seed as Nishikori used placement over power to finish off his opponent with a final break of serve, 3-6, 6-3, 6-3.

“It was a tough spot for me at first, he was hitting really good shots deep and flat,” Nishikori said. “Towards the end of the match, I tried to be a little more focused and play aggressive.”

The frustration was clear on the teenager’s face as Berankis got off to a fiery start. The Lithuanian was not only able to retrieve everything the rising star threw at him that gave most of his opponents trouble during the week, but he was able to switch from defense to offense nearly on command.

The “legendary” Fritz forehand was either flying out or into the net.  Within minutes, the world No. 102 had broken the Fritz serve three times before there was a slight eruption from the crowd as Fritz was able to find an opening and break Berankis for the first time. Unfortunately, the break was not enough to keep his opponent from holding and closing out the set, 6-2.

In the second, Berankis continued to keep the young American from getting into a rhythm. Both players would result to having to paint the lines to finish off rallies. After only winning 18% of the points off his second serve, Fritz made the adjustment to break Berankis, hold serve and break back again. After an hour on court, the match was leveled at a set apiece.

An early break by Fritz at the beginning of the third set signified an easy road to the win, but Berankis managed to capitalize on more second serve opportunities and keep the American from solidifying.

Midway into the set, an awakening occurred for the 18-year-old, suddenly cranking his serve harder and going for more shots as Berankis began to play safe.

“This is something that does not happen very often,” Fritz said. “I honestly felt that he was unbeatable in the first set and he was making me look really bad.”

At 18 years and three months, Fritz became the youngest American to reach a tour-level final since then 17-year-old Michael Chang won the 1989 Wembley title. He is also the first American teenager in a finals match since Andy Roddick finished runner-up in Montreal 2002.

The Polish/Mexican duo look to become the first defending champs to repeat in Memphis since Max Mirnyi and Daniel Nestor in 2012.