Several Umpires Are Being Investigated For Taking Bribes

Posted by TennisNews.com on February 14, 2016 in Tennis News 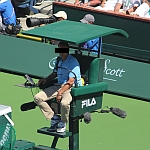 The integrity of tennis has suffered another withering blow with the news that two umpires have been banned from the sport and four others are being currently being investigated for allegedly taking bribes to manipulate scores on the International Tennis Federation’s Futures Tour.

The majority of players found guilty by the policing force of the sport, the Tennis Integrity Unit, of either throwing matches for financial gain or influencing others into corruption are found on this Futures tour, the third and lowest level of professional tennis, where first round loser can walk away from a tournament have earned less than US$80.

Now new information shows that umpires on the circuit, who earn no more than US$550 for a week’s officiating in such far-flung venues as Baku in Azerbaijan, Hammamet in Tunisia and Anning in China as well as Glasgow and Shrewsbury in the United Kingdom.

Eminent British sports lawyer Adam Lewis QC is currently setting up an independent review commissioned last month with the brief to quantifying the tennis anti-corruption program and the Tennis Integrity Unit (TIU), set up eight years ago and funded by the four governing bodies of the sport including the International Tennis Federation (ITF).

One major criticism of the tennis authorities in the last month has been a lack of transparency and it now transpires that the ITF have purposely covered up the case of Croatian umpire Dennis Pitner who was suspended last August for logging onto a gambling account where bets were placed on tennis matches.

Another official, Kirill Parfenov of Kazakhstan, was banned for life a year ago after contacting another official on Facebook in an attempt to manipulate the scoring of matches. Yet the suspension was never announced to the world at large.

According to an investigation by the Guardian newspaper, umpires from Kazakhstan, Turkey and Ukraine are among those alleged to have taken bribes from betting syndicates in exchange for manipulating live scores on the Futures Tour.

The manipulation is done by the improper use of computerized system belonging to Sportsradar, the Swiss-based sports data company that distributes live scores from very obscure tournaments on the Futures circuit . Corrupt umpires have allegedly delayed updating the scores on this system for up to 60 seconds, so allowing on-line gamblers to place bets knowing what was going to happen next.

The process is known within the sport as ‘court-siding’; a time-influenced process where a matter of seconds can result in massive financial gain thanks to the advantage gained by observing events live before betting markets react to changing scores.

As one sports betting insider said: “It is rather like standing next to the 18th green at a big golf tournament, seeing somebody sink the winning putt and then having an entire minute to place a bet on that golfer taking the spoils.”