Posted by TennisNews.com on February 18, 2016 in Business News 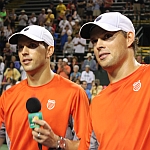 The Bryan brothers have joined the string of players leaving Lagardere, signing up with an old tennis name.

A story in Sportsbusiness Journal said the pair have gone to PR Management, which is run by Perry Rogers, the former agent of Andre Agassi.

The agency’s tennis representation has been severely reduced since it fired vice-president John Tobias, which led to other prominent agents also leaving. Among the Bryans, Agnieszka Radwanska, Kevin Anderson, Sloane Stephens, John Isner, and others have gone to other agencies.

Richard Gasquet and Caroline Wozniacki are still with Lagardere.

The Bryans had signed several non-tennis endorsement deals and been featured in prominent campaigns while with their former agency, including Esurance, Citibank and Barracuda.