Posted by TennisNews.com on February 25, 2016 in Tournament News 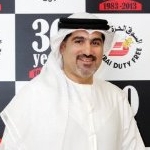 Salah Tahlak has fiercely criticized the leading WTA players for a ‘lack of commitment’ and has requested for stringent steps to be taken to ensure so many high profile players don’t bother even turning up at the tournament.

Serena Williams, Angelique Kerber, Agnieszka Radwanska and Dubai Duty Free global ambassador Caroline Wozniacki, were amongst a lengthy list of absentees that made last-minute decisions not to compete in the tournament.

Subsequently WTA president Micky Lawler attended three days of meetings with Tahlak and leading executives of Dubai Duty Free who have long been one of the most active and generous sponsors of women’s tennis. The tournament was further degraded by the fact that all eight remaining seeded players failed to win a match between them.

“This is the first time that has ever happened and it hit us badly in respect to ticket sales,” Tahlak told 360 degrees Sport.

“The players sometimes they don’t see or think how much the events and cities are investing behind this. And we invested a lot of money. We built the stadium, we built a five-star onsite hotel, all this counts over the years. And then imagine to have all the pictures of Serena, Radwanska, Caroline, all of them on Sheikh Zayed Road, it’s a lot of money.

“We are losing a lot of money, and then plus, to lose one of our brand ambassadors not to come. We absolutely appreciate what she did for us previously, she was really good at it, she attended all the events, she was committed. But this year everything collapsed, that’s really bad.”

Tahlak will attend more meetings with the WTA in Miami next month to discuss compensation and he continued: “All the top seeds not coming, not attending, that impacted our ticket sales, the tickets sales was very bad, it dropped drastically.

“So this is a problem. We spend a lot of money on ladies’ tennis, and we equalized the prize money, but it seems it’s not working.”

The problem was accentuated by the fact this week’s Qatar Open, just along the Arabian Gulf, is this week a Premier 5 event on an alternate year basis with the Dubai event. Lawler is to report back to WTA CEO Steve Simon at a meeting next week.

“Hopefully, something changes because we’re not happy about the whole situation, and we have done a lot for the WTA and we’re still doing,” added Tahlak. “We’re still global sponsors, we still like the sport, and we don’t want to penalize them because they have done well.