Posted by TennisNews.com on March 7, 2016 in Headline, Tennis News 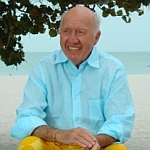 The world of tennis was saddened Friday with the news that everyone’s friend, Bud Collins, had passed away at 86.

Collins was everyone’s friend and likewise, everyone was a friend of Collins. He had a photographic memory; years after meeting him, he would call you by name and comment something about the circumstances of an earlier contact. How could one not like a man like that?

He was a man known for loud slacks, big smile and a prodigious memory. But a couple things about Collins that not everyone knows; he was a national champion of a tournament now known as the US Open and up to playing in his 50s he did not wear tennis shoes and socks, but played in his bare feet!

Writers around the world are saying there will never be another Bud Collins. How right they are. How could it be otherwise? There was only one Bud Collins.