Tiafoe Wants His Agency To Make Him A Big Name

Tiafoe Wants His Agency To Make Him A Big Name
March 12, 2016
Notice: Undefined variable: page_title in /home/tennisne/public_html/wp-content/themes/dante-child/single.php on line 205

Posted by TennisNews.com on March 12, 2016 in Tennis News 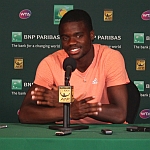 Frances Tiafoe wants his new agency, CAA, to help make him a big name in the United States so he can improve his charitable efforts. The rising American teen recently switched to CAA from Roc Nation. “I think it was a good change,” he said, explaining that he was impressed by its desire to sign him. CAA, which is one of the biggest entertainment agencies in the world, has recently begun increasing its presence in tennis by signing a range of up-and-comers from Milos Raonic to Tiafoe. “I think I can spend my whole career there,” said Tiafoe, saying the agency could “blow me up.”

The reason he’s looking to become more famous is “to help people in Sierra Leone,” where his parents are from, and “set up a foundation. I feel like I’m playing for so much more than myself,” he said. Tiafoe has a clothing sponsor in adidas.