Not Everyone Felt WTA’s Response To Sharapova’s Confession Was Harsh Enough
March 16, 2016
Notice: Undefined variable: page_title in /home/tennisne/public_html/wp-content/themes/dante-child/single.php on line 205 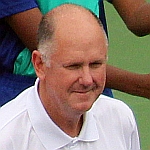 WTA chief executive Steve Simon was criticized for not taking a harder line when commenting on the plight of Maria Sharapova following last week’s admission of the Californian-based Russian that she had tested positive for the use of a banned substance Meldonium.

David Walsh, the award-winning British journalist for the Sunday Times who played a major role in exposing Tour de France winner Lance Armstrong even wrote in the Sunday Times that Simon’s comments were “cringe worthy” and  “demoralizing”.

Now more than a week on, Simon was presented with the opportunity to stress his fresh thoughts on the matter by The Times of London and said: “I did hear those quotes but I stand by my comments and I’m very comfortable with them.”

Simon was attending the BNP Paribas Open at California’s Indian Wells where he was tournament director until being appointed to succeed Stacey Allaster as the WTA’s CEO last October.

“The last thing I want to see is any athlete have a positive drugs test,” said Simon who was apparently the unanimous choice for the job by the WTA board of directors. “There is nothing good that can come from that; not for the athlete, not for the sport, not for anybody involved.

“That being said there is not an athlete that is above the rules. Maria tested positive and as a result she is now in the Tennis Anti-Doping Program. She was provisionally suspended from Saturday and will remain so as they go through their process.”

Simon is happy that the matter is no longer under the WTA’s governance as has been passed on to the Tennis Anti-Doping Program which is administered by the International Tennis Federation. Sharapova was officially suspended from competition last Saturday.

“It is effectively out of the WTA’s hands at this point because the process is independent and I think very healthy because the last thing we want in our sport is when the governing body is judge and jury,” he said.

“We have seen the repercussions of what that can bring and they determine the appropriate discipline and we are 100 per cent supportive of whatever that might be.”

Simon has not spoken to Sharapova face-to-face but admitted he has corresponded with her by email and text message.  “I do plan to check in with her but I know she really wants to come back and play,” he said.

“She does not want to end her career this way and I know she feels the mistake is on her. She is not saying she didn’t do it. She’s responsible for what goes into her body and this has been a terrible, terrible mistake she made. But I remain convinced, it was an honest mistake.”