Timea Babos Is Now With Fila

Posted by TennisNews.com on March 16, 2016 in Business News 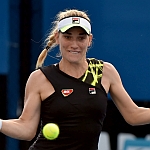 Timea Babos recently signed a multiyear footwear and clothing deal with Fila, which has been paying off for the company as she went up the rankings to a career-high No. 45.

The Italian company has been increasing its presence in the game, signing several deals with players and tournaments.

The player from Hungary was ranked No. 60 when the agreement was announced. Though she has dropped a few places to No. 49, the big-serving up-and-comer is still aiming high.

“But it can just motivate me that much more, that it’s really worth the work every day knowing that, if you work hard, you can reach the highest levels.”

There are been plenty of attention for the company’s current neon and black attire for women, also worn by another recent signing, Julia Goerges, and  others like Jelena Jankovic.

She has also been top 10 in doubles.