Rafael Nadal To Take Action Against Those Who Accuse Him Of Drug Violations
March 16, 2016
Notice: Undefined variable: page_title in /home/tennisne/public_html/wp-content/themes/dante-child/single.php on line 205

Posted by TennisNews.com on March 16, 2016 in Headline, Tennis News 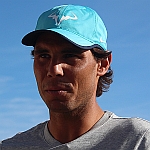 Rafael Nadal plans to not tolerate any more doping accusations against him and says he will sue anyone who makes them.

That begins with former French Minister of Health and Sport, Roselyne Bachelot, who appeared on a French TV program and said Nadal was not sidelined in 2012 because of knee problems. She said, “We know the famous injury of Rafael Nadal, where he stopped for seven months, was definitely due to a positive test. When you see a tennis player stopping for months, there has been a positive test. Not every time, but very often.”

Questioned about the comments, she said, “I merely reflected comments widely held in tennis and the press.”

There have been many sporting expressions of support for Nadal, including his favorite soccer team Real Madrid.

“Thanks very much everybody from the world of sport, and for sure everybody who did the comments supporting me, because have been really tough for me, you know,” said Nadal.

“I have been working so much since I have five years old, all my career, to have the success that I had, and always with the right way, always practicing with passion, with intensity, with love for the game.”

A lawsuit would stop the accusations, said the Spaniard,

“There is a couple of times I heard comments like this, and that’s what — this gonna be the last one, because I gonna sue her. I am tired about these things,” he said.   “I know how tough I worked to be here. To listen, to heard those comments from a person that should be serious, because was minister of a big country and a great country like France.

“I gonna sue her, and I gonna sue everyone who gonna comment something similar in the future, because I am tired of that.”