Becker Is Launching A Tennis Academy In China 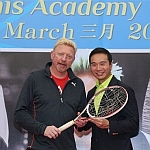 Boris Becker will work for the greater recognition of Chinese tennis after signing on as celebrity endorser of a new tennis academy in a country more known for a new-found love of golf as opposed to tennis.

The coach of world No. 1 Novak Djokovic will be associated with the training facility at the Mission Hills resort in Shenzhen, not far from Hong Kong. Becker said he found it odd that only Li Na had truly managed to break through in tennis from the world’s most populous nation, which hosts a large handful of WTA and ATP events annually.

“This is the biggest country in the world, but no male players in the top 100 – we’re about to change this,” Becker said at the launch of the project. “I’m old enough and mature enough to give back and hopefully can pass on my experience as a player and coach.”

The first students under the new Becker program will arrive in September.

“Boris doesn’t have time to coach another professional player but was willing to commit to this opportunity because he sees great potential in Asia and China in producing the next No.1 tennis players,” said a Mission Hills official. “He sees us as a doubles partnership where we’re helping to breed the next generation of tennis players in this part of the world.”

Becker visited the site this week and staged a clinic with junior players from Shenzhen and Hong Kong. “Clearly there is tremendous talent and potential among young tennis players in China,” he said. “To progress to the next levels, it’s imperative not only to provide outstanding facilities, such as those we have here at Mission Hills, but also to offer more opportunity to play tournaments.

“I believe that the Boris Becker Tennis Academy at Mission Hills will stimulate greater interest in the sport and prove the ideal training ground for boys and girls with the ambition to become world stars.”