BNP Paribas Is Happy With Its Sponsorship of Indian Wells

BNP Paribas Is Happy With Its Sponsorship of Indian Wells
March 22, 2016
Notice: Undefined variable: page_title in /home/tennisne/public_html/wp-content/themes/dante-child/single.php on line 205 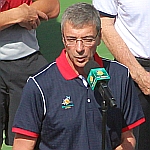 The regional CEO of BNP Paribas is happy with the company’s affiliation with Indian Wells and suggested its sponsorship of the tournament is secure.

“The BNP Paribas Open is one of the very, very top-titled sponsored events that we have,” Jean-Yves Fillion told the Desert Sun earlier in the week, saying he was “confident” about maintaining the relationship.

The French bank is one of the biggest sponsors in tennis and became the tournament’s title sponsor in 2009, a deal which has since been renewed. It sponsors four Masters events, the WTA championships, Davis Cup and Fed Cup and several grassroots initiatives as part of its extensive tennis involvement. It also owns the Bank of the West, which is a sponsor at Indian Wells, and also a title sponsor of WTA Stanford.

The two have connections that make it an effective partnership.

“What we do for tennis today is very global,” Fillion said. “The sport of tennis is probably one of the few sports today which is truly global. So is BNP Paribas.”

“The world of tennis in many ways, parallels the values of the culture of the bank. . . individual performance as well as teamwork, they both recognize what I would call the importance of sportsmanship and fairness.

“I think that they are both committed to dedication and self improvement.”

“Across the globe, we see the same deep level of passion and energy which spans nationalities, cultures and generations – and that’s very much what the bank is about – it’s all about diversity, it’s about global reach.”

While the tournament does not have the financial pressure of making a profit — tournament owner Larry Ellison puts profits back into the event, corporate backing helps it fulfill an ambitious agenda of development and expansion. Tournament director Ray Moore said, “The goal is to be one of the best tournaments in the world, and having the preeminent global sponsor of tennis as our title sponsor helps us immensely towards achieving that goal. They have been supportive, engaged and a true partner.”