ITF Chief Operating Officer To Leave At End Of Year

Posted by TennisNews.com on March 27, 2016 in Business News 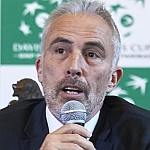 Juan Margets, the initial favorite to succeed Francesco Ricci Bitti at president of the International Tennis Federation after serving as the Italian’s right-hand man for the entirety of his 16 years long term, has stood down as Chief Operating Officer and will leave at the end of the year.

In his presidential role, Haggerty announced Margets’ imminent departure when he said: “Juan has played a very important role in the ITF for many years in both his management position and his chairmanship of key committees.

“His knowledge and experience have been very helpful in my transition as ITF President and his dedication, friendship and loyalty have been much appreciated. His contributions over the 18 years he has worked at the ITF plus the many years he served on the Board prior to joining full-time are too many to list.

“Juan is both respected and well-liked by the staff, our national and regional associations and our Board. We wish both Juan and his wife Paloma the best for the future and we hope to see them often in the coming years.”

Margets’ outstanding achievements at the ITF included the implementation of the Davis Cup and Fed Cup Nations rankings which created an objective system of seeding in both competitions, the expansion of the Fed Cup competition from two to three weeks, the creation of the Court Pace Rating rule which excluded extreme surfaces in Davis Cup and Fed Cup and a comprehensive review of the ITF’s media rights distribution model that resulted in the signing of beIN Sports as the ITF’s global media rights partner.

“It has been a privilege for me for over 25 years to be part of the ITF family, first as a member of the ITF Board of Directors and then in my senior management position in London,” said Margets. “I have served under three Presidents, Brian Tobin, Francesco Ricci Bitti and now Dave Haggerty, and the experience with each has been very rewarding. I will always remember the pleasure of working with my ITF team at Davis Cup and Fed Cup events and, of course, the Olympic Games.”

Margets will formally leave the ITF on September 30, 2016 but will consult through the end of the year and assist in the transition to a new Chief Operating Officer to be named at a later date.