Posted by TennisNews.com on April 27, 2016 in Tournament News 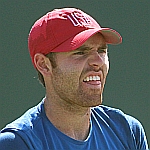 Bjorn Fratangelo, 22, of Pittsburgh, will make his French Open main-draw debut after earning a main-draw wild card into the French Open by winning the 2016 USTA Pro Circuit Roland Garros Wild Card Challenge. Fratangelo, who won the 2011 French Open junior singles title, clinched the wild card today after Jared Donaldson, the only player who could surpass him in the challenge standings, lost his first-round match at the $50,000 USTA Tallahassee Tennis Challenger.

Fratangelo will finish the wild card challenge with at least 115 points, the most of any American player. He claimed 80 points by winning the $50,000 St. Joseph’s/Candler Savannah Challenger in Savannah, Ga., last week and 35 points by reaching the semifinals of the $100,000 Joey Gratton Sarasota Openin Sarasota, Fla., two weeks ago.

USTA Player Development awards a French Open main-draw wild card to one American man and one American woman who earn the most ATP World Tour and WTA Tour ranking points in a series of USTA Pro Circuit clay-court events this spring. The USTA and the French Tennis Federation have a reciprocal agreement in which wild cards into the 2016 French Open and US Open are exchanged.

The women’s wild card challenge kicked off last week with the $50,000 Hardee’s Pro Classic in Dothan, Ala. Taylor Townsend reached the final in Dothan, earning 48 points and taking the early lead. Jessica Pegula, who reached the quarterfinals, is in second place. The second week of the women’s wild card challenge is taking place at the $50,000 Boyd Tinsley Clay Court Classic in Charlottesville, Va., this week, while the $75,000 Revolution Technologies Pro Tennis Classic in Indian Harbour Beach, Fla., will be held next week.

Fratangelo qualified for the 2016 Australian Open for his first appearance in a Grand Slam main draw outside of the US Open. He made his Grand Slam main-draw debut at the 2015 US Open after winning the USTA Pro Circuit’s US Open Wild Card Challenge last summer. In the challenge, Fratangelo reached the final of the $50,000 Challenger in Binghamton, N.Y., and semifinals at the $100,000 Challenger in Aptos, Calif., and the $50,000 Challenger in Lexington, Ky. In addition, he reached a final and a semifinal at ITF Circuit events in Italy in spring 2015. Those results helped propel him to a career-high No. 106 in the world in August. Overall, Fratangelo has won 10 USTA Pro Circuit and ITF Circuit singles titles over the last three years. This year, he qualified for the ATP events in Indian Wells and Miami. In Indian Wells, he won his first-round match and pushed world No. 1 Novak Djokovic to three sets in the second round.

As a junior player, Fratangelo—named after 11-time Grand Slam champion Bjorn Borg—ranked as high as No. 2 in the ITF World Junior Rankings and competed on the Junior Davis Cup team. In 2011, he became the first American since John McEnroe in 1977 to win the French Open boys’ singles title. He is coached by USTA National Coach Stanford Boster.