Posted by TennisNews.com on November 13, 2015 in Tournament News 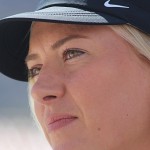 Maria Sharapova will aim for a personal breakthrough as she leads Russia into the weekend Fed Cup final, against the Czech Republic. “It’s a new experience,” said Sharapova in the run-up to the Saturday-Sunday tie against the holders. “I’ve been part of the team on different occasions but never in the final. There’s an incredible opportunity for me. It was a huge victory for the girls beating Germany in Sochi (in the semi-finals) as I couldn’t be there and I don’t think many people thought we would come through.”

WTA No. 4 Sharapova is playing to be eligible for 2016 Olympic team membership in Rio. The 28-year-old ranked fourth played her first event since Wimbledon in Singapore at the WTA Finals, reaching the semi-finals where she lost to fellow Wimbledon winner and weekend opponent Petra Kvitova. Sharapova stands 6-4 in the series but has lost her two matches against the sixth-ranked Czech who finished runner-up in Singapore to Agnieszka Radwanska.

Sharapova knows that the Russian side, also comprising Ekaterina Makarova, Anastasia Pavlyuchenkova and Elena Vesnina, will not be a favorite. The Czechs will field Kvitova long with Roland Garros finalist Lucia Safarova, 13th-ranked Karolina Pliskova and Barbora Strycova.

Sharapova said the hosts should have the initial edge, with her side viewed as the villains. “We expect a stadium full of Czechs – I’m sure there will be some Russian flags flying around – but there will be more Czechs in the stadium than Russians. Our full concentration will be on what is ahead of us and not on what’s going on around us. We expect to have a great crowd and a very nice atmosphere, we are going into this final as underdogs.”