Posted by TennisNews.com on December 4, 2015 in Business News, Headline 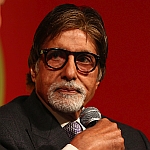 One of the most well known faces and voices of global cinema, Amitabh Bachchan, announced today that he will be co-owner of the OUE Singapore Slammers alongside the local company UD Group who acquired the team earlier this year.

Mr Bachchan will make a courtside on the 20th of December at the Singapore Indoor Stadium on the final day of the season. He will also be interacting with fans during the course of the day.

The OUE Singapore Slammers, co-owned by the UD Group and Mr Bachchan, are one of the five teams competing in the second edition of the Coca-Cola International Premier Tennis League (IPTL). Singapore will host the final leg of the competition from 18-20 December to determine who will be the league champion for 2015.

A massive tennis fan who has travelled the world to watch some of the best in action, his excitement is palpable as he can’t wait to get involved, “My work schedule allows me to only be there for one day, but I’m confident the Singapore Slammers will be playing in the final. I’m also really looking forward to hanging out with members of our clan, the #SlammersNation. I’d like to invite my fans and tennis fans alike to come spend the day with me at the Singapore Indoor Stadium.”

With an aim on developing the sport of tennis in Singapore, the UD Group bought the OUE Singapore Slammers to help cultivate the first generation tennis stars of Singapore.

Chairman Prateek Gupta said, “For us, the IPTL and the OUE Singapore Slammers is as much about entertaining the fans as it is about winning that trophy. In Mr Bachchan, we found a kindred spirit who believes in that aim. Moreover, his commitment to the sport of tennis means that he will be a crucial driver of our Junior Slammers program as well. We look forward to creating a winning team with a true Indian icon.”

You can catch Amitabh Bachchan at the Singapore Indoor Stadium which will be transformed into our #SlammersNation fortress in December when our seven stars  – Stan Wawrinka, Nick Kyrgios, Dustin Brown, Carlos Moya, Marcelo Melo, Karolina Pliskova and Belinda Bencic – will be looking for a strong home support to fight off the challenges of the four other competing teams.

Joining the OUE Singapore Slammers at the Singapore Indoor Stadium will be the UAE Royals, Indian Aces, Philippine Mavericks and Japan Warriors – the newest addition to the season – bringing 35 of the world’s top tennis stars into town for the three-day league climax.