Brazil Owes Djokovic From An Appearance In 2012

Brazil Owes Djokovic From An Appearance In 2012
February 23, 2016
Notice: Undefined variable: page_title in /home/tennisne/public_html/wp-content/themes/dante-child/single.php on line 205

Posted by TennisNews.com on February 23, 2016 in Business News 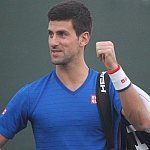 A lawsuit has been filed by Novak Djokovic, seeking unpaid exhibition fees from a Brazilian state government.

Djokovic played the offseason exhibition in front of 10,000 fans. He also took part in a local court opening and appeared at a soccer match.