Shroud Of Secrecy Covers Bouchard’s Lawsuit With The USTA

Posted by TennisNews.com on October 2, 2015 in Tennis News 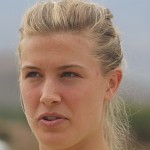 The lawsuit filed on behalf of Eugenie Bouchard over her fall and concussion on a slippery training room floor at the US Open is now shrouded in mystery, with the Canadian player’s lawyer admitting he’s unsure if the USTA wants to play hardball or not, with the case.

2014 Wimbledon finalist Bouchard – who has not played a complete match since the September 4 accident following a New York quarter-final win and retired in China midway through her only effort – has become more active on social media, posting herself at a basketball game but having little to actually say.

Her New York attorney Benedict Morelli told ESPN.com that the case could either be settled out of court or go to a jury trial. But things are complicated by the lack of a serious response from the litigation-hardened suits at the USTA.

The Bouchard case says the player, now ranked 38th, “suffered a severe head injury” caused by cleaners s had swabbed down the floor with what the suit describes as a “slippery, foreign, and dangerous substance.”

The Bouchard legal representative said that letters sent to four top USTA executives went unanswered with a legal letter coming back by way of reply. “None of them responded. We did get an answer from a law firm. . . If I send a letter to four of your top guys and the response is that your lawyer calls me, I get the message.”

There is no firm word on the 21-year-old Bouchard’s condition or when she will be returning to the court in the 2016 season. The USTA has slammed a wall of silence around the case, refusing to comment on “ongoing litigation.”

But the Bouchard team is confident they have the facts on their side. “If they want to go up against someone and claim that this 21-year old was in a slump when she was in the round of 16 in the US Open, I’m their guy,” Morelli said. “Look who won the tournament — a 33-year-old [Flavia Pennetta] who had never even won a big one before.

“If the USTA decides it wants to speak with me, I’m here to listen,” he said. “If they want to litigate, that’s OK too. Because that’s what I do. That’s why Genie and her mother hired me.”