Posted by TennisNews.com on October 14, 2015 in Headline, Tournament News 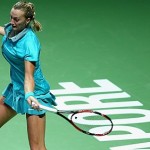 The Women’s Tennis Association (WTA) announced today that Petra Kvitova has qualified for this year’s BNP Paribas WTA Finals Singapore presented by SC Global for the fifth consecutive year. She joins Simona Halep, Maria Sharapova and Garbiñe Muguruza in the singles field of eight, with four more spots yet to be determined.

Kvitova is the second former champion who is set to play the 2015 WTA Finals, winning the title in her debut appearance in 2011 with a perfect 5-0 record. The two-time Wimbledon champion also reached the semifinals in 2013, falling to Li Na.

“I am so excited to qualify for the BNP Paribas WTA Finals Singapore for the fifth straight year,” said Kvitova. “I have been through some tough moments this season so I’m extra proud of myself for qualifying again and making it back to Singapore. Playing as one of the top eight is a big goal for me each year so I can’t wait to be back there, fighting hard and hopefully playing some great tennis in front of the Singaporean fans.”

Kvitova holds a perfect 3-0 record in WTA finals this year, winning titles at the Mutua Madrid Open, Apia International Sydney and Connecticut Open. The Czech fan-favorite also reached the semifinal at the Shenzhen Open and quarterfinals at the US Open and Internazionali BNL d’Italia – Rome.