Posted by TennisNews.com on October 18, 2015 in Headline, Tournament News 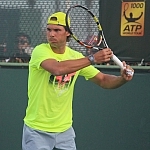 Just two spots remain in the eight-man field at the Barclays ATP World Tour Finals as Rafael Nadal and Tomas Berdych have secured their places at the Final Showdown.

Nadal and Berdych will compete alongside Novak Djokovic, Andy Murray, Roger Federer and Stan Wawrinka at the prestigious season finale. The world’s biggest indoor tennis tournament, featuring the world’s best eight singles players and doubles teams, will be played 15-22 November at The O2 in London.

Nadal qualified for the season finale for the 11th consecutive season after reaching the semi-finals of the Shanghai Rolex Masters, one week on from a runner-up showing at the China Open in Beijing (l. to Djokovic). His performances in China over the past two weeks saw him leapfrog Kei Nishikori and Berdych to rise to fifth in the Emirates ATP Race To London.

The Spaniard reached the final in London in 2013 and 2010. He missed last year’s tournament after undergoing a late-season appendectomy. (Nadal was also forced to miss the season finale through injury in 2005, 2008 and 2012).

In 2015 Nadal has captured titles at Buenos Aires (d. Monaco), Stuttgart (d. Troicki) and Hamburg (d. Fognini). He has also reached finals in Madrid (l. to No. 3 Murray) and Beijing. He boasts a 52-17 match record on the season.

The 30-year-old Berdych will make his sixth consecutive appearance at the Barclays ATP World Tour Finals. The Czech reached the semi-finals in London in 2011 (l. to Tsonga).

Berdych, who reached the quarter-finals in Shanghai (l. to Murray), has compiled a 51-18 match record on the season, highlighted by winning his 11th ATP World Tour title in Shenzhen (d. Garcia-Lopez) and reaching three other finals in Doha (l. to Ferrer), Rotterdam (l. to Wawrinka) and at the ATP World Tour Masters 1000 tournament in Monte-Carlo (l. to Djokovic).