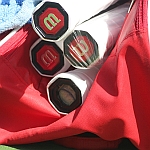 The number of people playing tennis in the U.S. and the number of tennis “play occasions” increased in 2015, according to the latest figures released by the Tennis Industry Association (TIA) and U.S. Tennis Association (USTA), which were part of the Physical Activity Council (PAC) Annual Participation Study.

In addition, 14.75 million Americans who are non-players are interested in playing tennis, and another 12.8 million who may not have played in the past year “consider themselves” tennis players.

Also noteworthy is increasing tennis participation among Hispanics in the U.S., which has been a priority for the USTA. In 2015, Hispanic tennis players jumped 12.2%, to 1.79 million players. Participation among Asians in the U.S. increased 5.6% in 2015 to 1.98 million. However, African-American players declined by 1.7% to 1.9 million, and Caucasian participation dropped .8% to 11.89 million.