Posted by TennisNews.com on October 21, 2015 in Headline, Tournament News 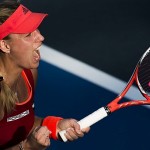 Angelique Kerber will make her third appearance at the WTA Finals, after previously qualifying in 2012 and 2013. The German was also the first alternate in 2014, but did not compete.

“I’m very happy to have qualified for the WTA Finals again,” said Kerber. “After being an alternate last year, I am excited to get back on the court and compete against the top players in the world. I had a great season and really pushed myself to qualify for Singapore – especially as the event came closer.”

Staged at the Singapore Sports Hub from October 23-November 1 in partnership with Lagardère Sports, the 2015 WTA Finals features the top 8 singles players competing for one of the most prestigious trophies in women’s tennis, the Billie Jean King Trophy, while the top 8 doubles teams will compete for the Martina Navratilova WTA Finals Doubles Trophy. With a record $7 million in prize money on the line, the round-robin singles competition will be the highlight of a 10-day tennis festival that will also include the WTA Legends Classic, WTA Rising Stars Invitational and a WTA Future Stars event.