Notice The Similarities Between Muguruza And Bouchard

Notice The Similarities Between Muguruza And Bouchard
October 30, 2015
Notice: Undefined variable: page_title in /home/tennisne/public_html/wp-content/themes/dante-child/single.php on line 205

Posted by TennisNews.com on October 30, 2015 in Tennis News 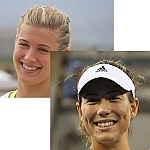 There are obvious similarities between Garbine Muguruza, this year’s WTA youngster who looks most likely to attain superstar status, and Eugenie Bouchard who was her predecessor in 2014.

Both are already beaten Wimbledon finalists, both have seen the benefits of employing Sam Sumyk as their coach although Bouchard’s relationship with the Frenchman who guided Victoria Azarenka to two Australian Open title and the world no.1 ranking ended acrimoniously after just a few months.

But Muguruza has gone two matches undefeated in her WTA Finals debut in Singapore whereas Bouchard lost all three of her group matches in straight sets last year. And the Spaniard is determined not to experience the same pitfalls in 2016 and those which have befallen Bouchard.

A year ago the future looked bright for Bouchard who peaked as the world no.5 but now finds herself way down in 48th position on the WTA rankings and newsworthy purely because of impending law suit against the United States Tennis Association the 21 year-old’s lawyers say could bring her ‘million and millions of dollars.’

Muguruza clearly does not feel comfortable with the comparison and said: “It’s an example of something that can happen, obviously. I saw an example in Genie and it’s not a good example. Hopefully I can manage these kind of situations better and try not to [let it] happen this to me.”

The Venezuelan born Spaniard looks more than at home faced with the high level of competition in Singapore and has already registered round robin group wins in straight sets against Lucie Safarova and Angelique Kerber. Plus she is also making her presence felt on the doubles court alongside Fed Cup team-mate Carla Suarez Navarro.

“I’m feeling very good,” she reported.  “You never know how it’s going to go when you come here for the first time.  For sure, I’m very happy of how is it has been. It’s great to be here in singles and doubles.  I’ve played all the year in both, so it’s great to have this payoff of being here.”

And Muguruza does not mind the constant questioning of whether she is destined to be the next top player in female tennis even though such luminaries as Tracy Austin and fellow Spaniard Arantxa Sanchez Vicario have been praising her all week in Singapore.

“Yes, I want to be but let’s see if it happens,” she says with a smile. “It’s good that people see in me like a future top player. It’s nice to hear that and obviously that’s what I’m trying to do.  That’s all I can say.”