It Is A Different Life For Muguruza Now

It Is A Different Life For Muguruza Now
June 8, 2016
Notice: Undefined variable: page_title in /home/tennisne/public_html/wp-content/themes/dante-child/single.php on line 205 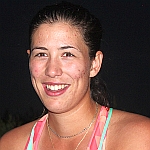 Before Saturday’s French Open title win, Garbine Muguruza was the prime hunter of Grand Slam champions in the women’s game. Now, by virtue of outhitting and outplaying Serena Williams at Roland Garros, the 22 year-old Spaniard has become the hunted.

Not just the newest Grand Slam champion but also world no.2 in pursuit of Williams, Muguruza insisted she is looking forward to the challenges that lay ahead. “I prefer to be hunted than to be the other way around; I will not change it,” said Muguruza beat Williams 7-5, 6-4 win and so again denied the American a place alongside Steffi Graf with a total of 22 singles majors.

“All the top players are a little bit hunted. Now all the other players are going to be looking to beat me and that’s normal. But I like my new position.”
Muguruza’s next competitive outing will be at the newly instigated grass court Mallorca Open that begins next week. A fortnight later she will be back at Wimbledon where she lost last year’s final to Williams.

“I haven’t even thought about yet,” she admitted. “Sure I am looking forward to it and feeling whatever I will feel. But the important thing for me is to keep the level that match by match I been improving, since the first match at Roland Garros where I was very tight. After that I felt better and better. So hopefully I can keep that until Wimbledon.”

And Muguruza revealed that in her home country, she is not viewed as a stereotypical Spanish tennis player. “I grew up and my body was not like a Spanish player,” she said.

“I was tall, I had a powerful game, my arms were long, so I’m like, ‘No, you can’t play like Spanish players. You’ve got to go for it, hit hard, kind of more Russian style.’ That’s what they call me in Spain, ‘Oh, Garbine and her Russian style.'”