Posted by TennisNews.com on November 16, 2015 in Tennis News 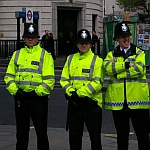 The horrific terrorist attacks on Paris by ISIS on Friday night shocked the world and tennis has subsequently tightened up security for both the Barclays ATP World Tour Finals just a train ride away in London and the upcoming Davis Cup final in Ghent, just across the border in Belgium.

This time next week the British team will have gathered in Ghent for the Davis Cup final and around two thousand fans will be crossing the English Channel in support. Therefore both national and tennis authorities are working hard around the clock to ensure all will be safe.

Overnight in the Brussels suburb of Molenbeek, barely 30 miles distant from the Flanders Expo where the Davis Cup final will begin on Friday, Belgian police have arrested seven suspects in what has been described as an ‘Islamist bastion’.

Speaking from Prague where the Czech Republic beat Russia 3-2, ITF President David Haggerty said:  “Following the tragic events over the last few weeks, all sporting events require heightened levels of security and this includes both the Fed Cup and Davis Cup Finals.

For our finals and other ITF events, we follow a rigorous process that includes regular consultation with our experts to ensure that we take every precaution to safeguard our events, fans and players.”

Across at London’s 02 Arena, the French doubles pair of Nicolas Mahut and Pierre-Hugues Herbert were planning a special tribute to the victims in the initial round-robin match today.

Mahut lives in Paris and revealed he and Herbert were having dinner together on Friday evening when news of the attacks began to break in London. “Of course we were scared,” said the Frenchman. “I just talked to family and friends. I had some friends who were having dinner in the Bataclan area on Friday night. They are safe.

“At this moment we should be having fun playing the World Tour finals but today it’s really complicated for us. On Friday night, we were having dinner together, having fun, and what happened changed our state of mind. Tennis comes second now. I would love to be in Paris right now, to be honest, to be with my friends and with the family. But firstly we have to play this tournament.”

Meanwhile ticket holders will not be allowed to take food or drink into the London arena and all bags will be searched. No bags larger than a small laptop bag or handbag will be permitted through the security entrances during the entire tournament and visitors are urged to travel light, as there is no storage on site.

Players on court wore black ribbons in respect for the Parisian dead and there was a minute’s silence before the two singles matches yesterday.

Novak Djokovic used the ceremony where he was presented with the 2015 World No.1 Trophy to give his own personal message to the people of Paris, where just a week earlier he won the BNP Paribas Masters title.

“I just would like to reflect on what happened a couple of days ago [in Paris],” said the 28 year-old Serbian. “All my heart goes to the families of the lost ones. It was really devastating to see those images and footages. I just want everybody to make one more applause in remembrance to these people.”

Jamie Murray’s Australian doubles partner John Peers also spoke out after the pair’s initial win of the tournament. He admitted it was very difficult to take part in what is effectively public entertainment so soon after such horrific events so close at hand to London shocked the world.