Posted by TennisNews.com on November 19, 2015 in Tennis News 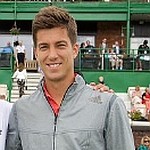 An apparent lack of communication between the International Tennis Federation and Britain’s Lawn Tennis Association means Aljaz Bedene is now forced to ensure another five months of not knowing whether he can be integrated into the British Davis Cup team.

There was optimism the world no.45th ranked Bedene would actually be able to play for Britain in next week’s Davis Cup final against Belgium.

However the news his appeal against the ITF’s adjournment of the hearing in Prague initial decision to block his switch of tennis nationality was adjourned in Prague today.

Instead British captain Leon Smith was forced to follow ITF regulations and name a four-man squad of Andy and Jamie Murray, Kyle Edmund and doubles player Dominic Inglot. In addition James Ward, who played the first two ties this year against the United States and France, will also travel with the team with the captain knowing his can change his nominations up to one hour before next Thursday’s draw.

Bedene, who has basically been blocked from becoming a British player because he contested two dead rubbers for Slovenia more than three and a half years ago, flew to Prague for a planned meeting of the ITF’s Davis Cup Board of Directors with the Lawn Tennis Association’s legal director Stephen Farrow and his manager Allon Khakshouri.

However, just minutes before the designated starting time of the meeting, the trio were informed tennis’ governing body, was not ready to hear the appeal and the case was adjourned until March 20 – 21 next year.

So this will not only rule Bedene out of this year’s Davis Cup final but also next year’s World Group first round tie against Japan, scheduled to take place more than two weeks earlier.

According to The Times of London, LTA chief executive Michael Downey stressed his immense disappointment at the ITF’s late decision. “We feel it is important to state that we have complied with the process set forth to us and are working hard to achieve a positive outcome,” he said.

“It is in everyone’s best interests given how long this process has been ongoing, that a fair hearing does place as soon as possible, ideally before the first round of Davis Cup in March 2016.  That has to be the number one priority going forward.”