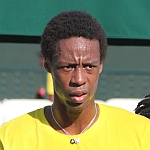 Gael Monfils is ready to blame decisions being made by the French federation if his country exits in the first-round Davis Cup tie on outdoor red clay against Canada on March 4-6.

While the participation of Australian Open semi-finalist Milos Raonic may still be up for discussion after he was injured in a Melbourne loss to Andy Murray, Monfils said that playing the tie in the American hemisphere instead of Europe guarantees that Canada’s strongest player – if fit — will be there.

The competition will be held of the overseas department of Guadeloupe in the French Caribbean, homeland of Monfils’ father. “Every time, we miss the boat. Milos, we were talking (in the locker room), and he said if it was played in Europe, ‘no chance’ he’d come, ” Monfils said. “He’s playing Delray (Beach in February), he’s playing in the celebrity thing in Canada (the NBA All-Star Celebrity game in Toronto February 12) “He like, ’It’s nice and close’, so he’ll go. Every time, it’s always the same thing. We never really make the right decision.”

Raonic has not played Davis Cup for a year, participating in a win over Japan in the 2015 first round. The Canadian is now waiting to hear from doctors after an adductor muscle injury which hampered him in his four-hour, five-set Melbourne loss to Murray.

“Honestly, I’m not in the mental state where I would be seeing a doctor to get a recommendation today. Maybe that happens tomorrow or whenever I feel like I’m ready to face that situation,” the Canadian said, “When that comes, I’ll deal with it accordingly.”