Posted by TennisNews.com on November 27, 2015 in Tournament News 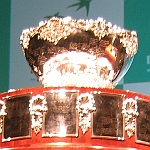 Belgium has waited 111 years to again experience the euphoria of a Davis Cup final and with just two days remaining, captain Johan Van Herck and the entire squad are determined that the show must go on despite terrorist concerns.

The city of Ghent was a picture of calm this morning as the Belgian and British teams continued their preparations at the Flanders Expo amidst hammering and banging as the temporary 13,000 seat stadium was still being out constructed.

But captain Van Herck spoke very clearly as he insisted: “I think is very important that the final takes place and not only just for the security. It’s important for us as a team that we represent out country well and we want to be an exemplary team.

“I never thought this final would not happen. I think we as a team have a lot of confidence in the organization and I know they put in a lot of work even before we got here.

“A lot of work has been put in here on security and we have no doubts that we will be safe here.”

While the British captain Leon Smith was still giving no clues on who would get the pick between the more experienced James Ward and potential rookie Kyle Edmund for the second singles spot, the Belgian line-up seems pretty clear with David Goffin and Steve Darcis ready to play on Day One, and the only slight bit of mystery concerning the doubles pairing.

Captain Van Herck added: “If we win or lose, there will be no excuses for us. We will be there with a good attitude and we will be ready.”

Darcis reported himself to be fully fit after injuring his ankle and being forced to retire from the IF Stockholm Open’s second round five weeks ago.
And Goffin maintained he had purged the memory of a 6-1,6-0 thrashing at the hands of potential fourth rubber opponent Andy Murray at the BNP Paribas Masters in Paris three weeks ago.

“This is a different setting on a different surface with a very different crowd that is going to be on our side, “said world no.16 Goffin.

“I didn’t play really well in Paris but Andy was really aggressive that day and played an unbelievable match. I just have to forget that match and think about the two I have to play this weekend.”