Posted by TennisNews.com on December 15, 2015 in College News 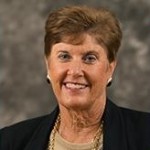 Dr. Ann Lebedeff, Professor of Physical Education and Athletics and Women’s Tennis Head Coach at Pomona-Pitzer Colleges, was honored with the 2015 ITA Meritorious Service Award, presented by ConantLeadership, on Monday evening at the 2015 ITA Membership & Awards Banquet at the 2015 ITA Convention, held at the Naples Grande Resort in Naples, Florida.

The ITA Meritorious Service Award is given annually in recognition of an ITA coach who has gone “above and beyond” in their commitment and contributions to the ITA and college tennis in general. Lebedeff was nominated for the award by the ITA Board of Directors.

“College tennis is ultimately about higher education,” said ITA Chief Executive Officer Timothy Russell. “Our coaches are great educators, mentors, and leaders. The ITA Meritorious Service Award honors an individual who exemplifies the best of the best, and goes ‘above and beyond’ the call of duty. Ann embodies everything that the award signifies, and more. The ITA salutes Dr. Lebedeff and thanks ConantLeadership and Douglas Conant, himself an astonishing leader and mentor and friend of college tennis, for their support.”

As part of receiving the Meritorious Service Award, Lebedeff and a guest, courtesy of the ITA and ConantLeadership, will attend the 2016 Rolex Enshrinement Weekend in Newport, Rhode Island, where Lebedeff will be recognized during the International Tennis Hall of Fame Luncheon on July 16, 2016, immediately prior to the ITHF Induction Ceremony.

“I am so honored by Conant Leadership and the ITA for receiving the Meritorious Service Award,” said Lebedeff, who currently serves on the ITA’s Board of Directors. “I have always felt that my career as a collegiate tennis coach was reached accidentally. Having been a junior and collegiate player pre-Title IX, I never thought about a career as a coach. But needing a job and with the support of strong mentors in tennis, I was blessed to find my calling. I love what I do, and being a leader to my teams and students has been a life-long passion. We, as coaches, are so fortunate to be of service to so many. It is our obligation to pass the torch on to our future leaders and coaches in tennis.”

“Ann Lebedeff exemplifies the concept of “meritorious service,” said retired ITA Chairman of the Board, David A Benjamin. “Over the span of her illustrious coaching career, Ann has provided extraordinary help and support to the ITA and college tennis in countless ways: serving for many, many years as a co-chair of the ITA Board and a variety of key committees, mentoring fellow coaches, and most importantly, providing a great role model as a Volunteer for all seasons. On a personal level, Ann has been a most special colleague and wonderful friend, and I am delighted with her selection as the winner of the 2015 ITA Meritorious Service Award, presented by ConantLeadership.”

A four-time Wilson/ITA Coach of the Year Award honoree (1990, 1992, 2001 and 2008), Lebedeff was named the Division II women’s tennis ITA/Wilson Coach of the Decade for the 1990’s. She was recognized by the International Tennis Hall of Fame in 1999 with the Tennis Educational Merit Award, which is given to a man and woman who have made notable contributions in the field of tennis education, leadership and promotion of the game.

In that same year, Dr. Lebedeff was presented with the Rolex Meritorious Service Award presented by the Intercollegiate Tennis Association.  This award honors a college coach who has made extraordinary contributions to collegiate tennis.
“As a young female coach coming up through the ranks, Ann Lebedeff was someone I truly admired,” said Erica Perkins Jasper, ITA Chief Operating Officer. “A great, successful coach, Ann has done everything in her career the right way and with care and passion for the sport, while giving back in numerous ways.  Ann has paved the way for women coaches and led by example-for this all of us owe her tremendous thanks.”