Stars thrill on day one of the Mubadala World Tennis Championship

Stars thrill on day one of the Mubadala World Tennis Championship
December 31, 2015
Notice: Undefined variable: page_title in /home/tennisne/public_html/wp-content/themes/dante-child/single.php on line 205

Posted by TennisNews.com on December 31, 2015 in Tournament News 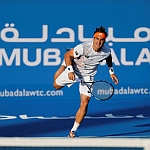 The eighth edition of the Mubadala World Tennis Championship burst into life on Day One with some of the tournament’s most thrilling tennis served up by four of the world’s top players in Abu Dhabi. The spectacular evening at Zayed Sport City’s International Tennis Centre saw world number 7 David Ferrer dispatch French favourite Jo-Wilfried Tsonga in straight sets, while Canada’s Milos Raonic won the battle of the big hitters over world number 12 Kevin Anderson.

In the first match of the three day tournament – and the first competitive match of the new global tennis season – Spaniard Ferrer showed all his class to push past Tsonga in what was an inspiring championship opener. With both players settling into their swings in the opening exchanges and the first three games going with serve, it was Ferrer who took the initiative etching out an early break and accelerating through the games.

Taking the first set 6-1 Ferrer looked pacy, agile and hungry for victory as he battered back definitive returns to every one of Tsonga’s intelligently placed shots. After laying down a firm marker in the first, it was more of the same from Ferrer in the second set as he stretched out a comfortable 5-0 lead with his light feet and accuracy. Despite a less than flattering score line, Tsonga’s hard work paid off when he secured a game late in the match, but any resurgence was quickly stamped out by Ferrer who sealed victory 6-1, 6-1.

The comprehensive win sets up a highly anticipated all-Spanish semi-final on day two as the Abu Dhabi faithful countdown to fourteen-time Grand Slam champion, Rafael Nadal’s return to centre court in Abu Dhabi. Ferrer and Nadal will face off at 5:00pm.

“It’s not easy, the first match of the new season but I am happy with the result. That said, I think it’s fair to say it wasn’t Jo’s best day today. I’ve benefitted from time in Valencia pre-season with a lot of fitness and feel I’m getting better all the time,” Ferrer commented after his match.

Looking ahead to his semi-final match against Nadal, Ferrer added: “It’s good for me to be able to test myself against Rafa tomorrow and be able to improve and work some things. I’m guaranteed another two matches now which is perfect and what all the players want and need at the beginning of the season.”

“Tomorrow I will try to play similarly to today. Rafael is one of the best players in the world and I have played well against him in the past but tomorrow is another day and it’s going to be a tough match. I hope the fans enjoy our match and we play some good tennis,” he added.

The second match of the tournament between Abu Dhabi debutants Kevin Anderson, and Milos Raonic was exactly the heavyweight battle the crowds had hoped for, as two giants of the sport traded blows into the last few hours of 2015.

The first six games of the match went with their respective big serves as the duo sounded each other out at the start of the new season, but it was the slightly more agile Raonic who was able to create the first opportunity, securing a break at 3-3 and powering to a 6-3 set win.

Despite the first set loss, South Africa’s Anderson showed no interest in laying down as he burst in to life in the second, dominating his service points and challenging hard on the Canadian’s. However it was Raonic who engineered the first break in the second set to move ahead to 4-2. As Anderson fought hard to stay in the match, Raonic’s break proved crucial as he took the win 6-3, 6-4.

Speaking after his victory Milos Raonic commented: “It’s a great way to start the next season. I’m very happy and did the basics well – I served well and moved well, so it’s great. I feel as close to 100% as I’ve been in a long time so that’s positive. That’s confirmation that the work I’ve done in the off season and I feel like I was improving all the time.”

Ahead of his semi-final clash with Stan Wawrinka, Raonic added, “It’s going to be a tough match and I’ve had poor results against him in the past. But it’s a new year and a new chance so I’m looking forward to it. I feel like if I do things right, return well, serve well, I think that’s where my tennis starts and if I can get it to be played on my terms I can do quite well.”

Day two of the three-day ‘winner takes-all’ competition will see all six top players in action on the same day. At 2.30pm Tsonga and Anderson will showdown in the 5th/6th place play-off before Rafael Nadal makes his exciting return to the UAE capital against fellow Spaniard David Ferrer. At 7pm reigning French Open champion Stan Wawrinka gets his season underway when he takes on Milos Raonic for a place in Saturday’s final.