Posted by TennisNews.com on January 1, 2016 in Tournament News 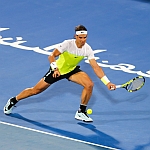 Rafael Nadal opened his new season with an emphatic victory over David Ferrer to set up a thrilling Mubadala World Tennis Championship final against tournament newcomer Milos Raonic at Zayed Sports City tomorrow. Meanwhile David Ferrer will take on Stan Wawrinka in the third/fourth place play off after another scintillating day of top flight tennis in Abu Dhabi.

Day two opened with a sensational showdown between South Africa’s Kevin Anderson and Feliciano Lopez, the Spaniard stepping in as a replacement for Jo-Wilfried Tsonga who was forced to withdraw from the tournament due to injury. The symbolic first match of 2016 was memorable thanks to its high quality and big hits as Anderson and Lopez both showcased their desire for victory. As each game went with serve it came down to two tie breaks, both won by Lopez 7-6. The titanic tussle, which saw 25 aces, was decided in 1 hour 40 minutes of thrilling tennis.

The action continued on centre court as fans packed out the stadium to see Rafael Nadal make his anticipated return to the capital. He took on compatriot David Ferrer in one of the longest and most highly-charged matches in the tournament’s history. Nadal dominated the early exchanges to win the first set 6-3 but in typically dogged style, Ferrer came back from a break down in the second to take it to tie-break. Fans were on the edge of their seats as Ferrer won the tie 7-6 and set up a third set, Nadal winning it 6-3 and bringing the all-Spanish showdown to a close after 2 hours 23 minutes. Much to the delight of the crowd, the 14-time Grand Slam champion was imperious, showing all the signs of what could be a glorious return to form in 2016. Should he take the crown tomorrow it would be his third victory in Abu Dhabi and his first since 2011, a year which saw him go on to reach the final of three of the four Grand Slams and win the French Open.

Speaking after his match, he said: “My year has started very well, it was a great match. The rhythm and the intensity of the game was like after six months of a season. Both of us were happy with the way we played and happy with the way that we moved and how we competed. We tried our best and I think people enjoyed it, we played some great points. For me it’s important to start with a victory.”

“Since three or four months I am playing much better, I feel much better on court and today was a good confirmation of that. I’m happy with the way I played in all aspects and now I just need to keep going. I am working hard to be at the level of the best players and I know that when I was playing well in my career I was ready to compete against all of those guys. I feel good now so let’s see, I feel ready to compete,” he added.

Abu Dhabi newcomer Milos Raonic meant business in the closing match of day two when he took on reigning French Open champion Stan Wawrinka. In a stunner of a first set which saw the Canadian go on a 14-point winning streak, Raonic fought his way back from 5-2 down, taking the next five consecutive games to close the first in his favour. The second set saw Raonic secure the first break and, after Wawrinka answered with a break of his own, Raonic eventually served out the match out to win 7-5, 7-5.

“I’m happy with the way things are progressing, I’m hoping to play better tomorrow and that’s really all I can ask of myself. It’s going to be a tough match that’s for sure; Rafa always makes it tough. I thought he played very well today, it’s going to be an exciting opportunity tomorrow. Rafa is the kind of guy that needs matches. He played a lot at the end of the year, he has those matches behind him and he’s obviously going to feel confident he’s going to find the answer. Tomorrow hopefully I can take some of those answers away.”

The final day of the annual season-opener in Abu Dhabi will see Wawrinka take on Ferrer in the 3rd/4th place match followed by what is sure to be a super-charged final between two-time Champion Nadal, who is enjoying his seventh outing at the tournament, and Abu Dhabi newcomer, Raonic.