Milos Raonic Is Showing He Really Is The Real Thing

Milos Raonic Is Showing He Really Is The Real Thing
March 19, 2016
Notice: Undefined variable: page_title in /home/tennisne/public_html/wp-content/themes/dante-child/single.php on line 205

Posted by TennisNews.com on March 19, 2016 in Tennis News 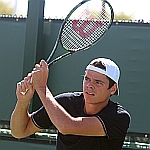 Milos Raonic is proving himself to be a consistent performer in 2016’s biggest events, reaching the semi-finals in Indian Wells’ BNP Paribas Open after his run to the last four of the Australian Open and previously winning the Brisbane Open.

The big Canadian credits a change in his philosophy on serving, prompted by discussions with new coach Carlos Moya. Although he still hit seven aces past Gael Monfils to win 7-5,6-3 and move through to a semi-final match-up with Belgium’s David Goffin, he is adding more variety to his delivery and believes the tactic is working.

“I’m using a lot more of the body serve,” admitted Raonic who missed Canada’s recent Davis Cup trip to Guadaloupe to play the French because of a torn abductor suffered in the Australian Open semi-final against Andy Murray.

“I think that’s a simple factor. You have most guys that were covering two serves against me. Now I think I have given them three serves to cover. Plus I’m coming in on pretty much all three of those. It gives me sort of six options to work with.”

Raonic admitted he took some convincing on changing his tactics on going all out for a bug ace on every serve. “I was a little bit stubborn about it,” he acknowledged. “I think I know pretty good about my serve, so I can be stubborn about that. Other than that, I think I’m one of the most open guys.

“I think it was a big thing that came from Carlos at the start of this year. As soon as I started incorporating it earlier in matches in maybe points that weren’t as important, I saw the effectiveness of the things and then it gave me that kind of conviction that it can be a very important key to my game even in the important moments.”