Posted by TennisNews.com on January 9, 2016 in Business News 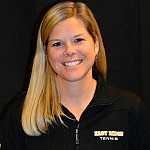 Professional Tennis Registry (PTR) will present its annual awards during the 2016 PTR International Tennis Symposium.  The event, which includes more than 40 educational presentations for tennis teachers and coaches, will be held February 17-20 on Hilton Head Island, South Carolina.

Heideman has coached the Boys Varsity Tennis team at East Ridge High School in Woodbury since 2011, and the Girls Junior Varsity team since 2014.  Every year, the programs have grown in numbers and success.  The boys finished third in State Class AA in 2014, and as Consolation Champs in 2015.  With the school’s first trip to the state tournament and upsetting the top-seeded team in the first round, Heideman was awarded the 2014 Minnesota Boys Tennis Coach of the Year.

With a record 81 boys out for the program in 2015, she was named to the 2015 USTA No-Cut All Star Team.  Heideman has always believed in no-cut programs.  As a former Head Coach for Greendale High School, a Milwaukee suburb, Coach Heideman was voted Wisconsin Coach of the Year, and led her Boys team to a State Championship in 2005.  Under her leadership for six seasons, the boys and girls varsity squads at Greendale won an impressive five Conference Championships.

A stand out tennis player herself, Heideman graduated from Mounds View High School in 1997, where she captained three varsity sports, competed in the state tennis tournament, and received the Athena Award.  She brought her talent to the University of Wisconsin – Eau Claire, where her teams won four consecutive WIAC Conference Championships.  During the spring of her senior season, the team advanced to the DIII National Championships, topping off an impressive four year rise to the top.

Heideman continues to play and competes in WTT and USTA League tennis at the 4.5 level, where several of her teams have advanced to the National Championships.  She became a PTR teaching pro in April of 2012.  Her family was named USTA Tennis Family of the Year for the Northern Section in 2002.  Besides teaching, coaching and playing tennis, Heideman stays at home with her children.  During the summer months, she works with the East Ridge boys and girls teams running Little Raptor Tennis Camps to keep the program successful and growing!