Posted by TennisNews.com on January 14, 2016 in Tennis News 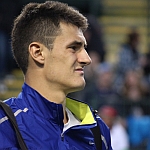 A New Year but still more controversy for the fiery Australian Bernard Tomic who has been involved in a confrontation with staff at the Royal Pines Tennis Club on Queensland’s Gold Coast.

Tomic was using the club as a training base during last week’s Brisbane International. However according to the local newspaper of the area, the Gold Coast Bulletin, he told club members using the courts to leave before arguing with the club manager about paying the AU$20 court fee.

Reportedly the manager fielded several complaints about Tomic’s attitude to the members and then informed the 23 year-old who this week achieved a career high ranking of world no.17 after reaching the Brisbane International he would have to pay for his court time.

Tomic responded with a barrage of bad language but rapidly apologized. “I’ve been so focused on preparing for all my matches,” he told the Gold Coast Bulletin.

“I know there’s no excuse for my behavior. I didn’t mean to cause any trouble and I apologize to the club members. There seems to have been a bit of a misunderstanding and my practice was interrupted, and I got a bit frustrated.”