Tomic Defends His Decision To Skip The Olympics

Tomic Defends His Decision To Skip The Olympics
May 25, 2016
Notice: Undefined variable: page_title in /home/tennisne/public_html/wp-content/themes/dante-child/single.php on line 205

Posted by TennisNews.com on May 25, 2016 in Headline, Tournament News 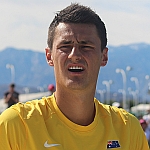 Bernard Tomic has defended his controversial decision to abandon Australia at the Summer Olympics and play a new ATP event in Mexico instead. The on-again, off-again Davis Cup stalwart (16-4 in the competition) insists that though he won’t be on side for the green-and-gold in Rio next August, his loyalty should not be questioned.

Tomic made the call to play the Tour instead of the Games as Nick Kyrgios faces headwinds in his own campaign to insure Olympic squad inclusion after a Twitter run-in the head bureaucrat of the national Olympic committee.

“My loyalty is always there. For Davis Cup it’s huge and when I’m playing there it’s amazing,” he said.

“My schedule has been very, very tough. What I’ve chosen is the way I’ve chosen. That’s all I can say about that. “I’m not going (Olympics, I’m going to play another tournament; it looks like it’s a bad thing but really my schedule this year has been that way. Playing that tournament, I’ll try and win it.”

Meanwhile, the No. 22 opens his French Open = weather permitting – against American Brian Baker in the first round of the weather plagued major.