Posted by TennisNews.com on February 28, 2016 in Business News 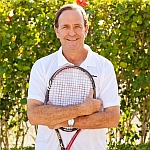 Cliff Drysdale, one of the most popular personalities in the international tennis community, will be among the presenters at the 2016 Tennis Owners & Managers Conference in Miami March 23-25.

Drysdale, who was inducted into the International Tennis Hall of Fame in 2013, has devoted over four decades to promoting the advancement of tennis. His contributions to the game span across an award-winning career as a professional player (winning 35 singles titles and 24 doubles titles, including a US Open doubles crown), leadership roles in advancing Open Tennis, and the founding and presidency of the Association of Tennis Professionals (ATP).

Drysdale has been one of the game’s pre-eminent television commentators since the late 1970s and has been the “voice” of ESPN since the network’s inception in 1979. He also is the owner of a tennis management company, Cliff Drysdale Tennis. At the Tennis Owners & Managers (T.O.M.) Conference, he’ll talk about where the sport is heading and how to continue to increase growth in the tennis business.

The third annual T.O.M. Conference, which is presented by the Tennis Industry Association (TIA), will bring together leading experts in facility management, programming and other key areas to provide vital information to grow tennis businesses and bring in more tennis players. The event will take place at the Hilton Miami Downtown, during the 2016 Miami Open pro tennis tournament. To register, visit TheTOMConference.com.

The T.O.M. Conference also will provide an opportunity for attendees to learn about the latest products and trends and to experience interactive resources and ideas, as the event will feature a unique Tennis Tech Fair & Resource Center and an “Idea Fair” workshop.

On the morning of Wednesday, March 23, a State of the Tennis Industry Forum will be held, prior to the start of the T.O.M. Conference. The Forum is a free event, open to all in the tennis industry, however space is limited, so registration for the Forum is required at TheTOMConference.com website.