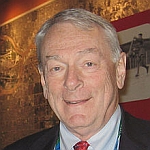 Dick Pound, the former World Anti-Doping Agency president and widely acknowledged as the foremost expert on drugs in sport, has described Maria Sharapova’s positive test for the use of meldonium as “reckless beyond description”.

Pound spoke out in the light of three of Sharapova’s major endorsers, Nike and Tag Heuer, pulling out of contracts with the IMG managed 28 year-old. German carmaker Porsche said it was “postponing planned activities” with the five times Grand Slam event champion until the situation became clearer and the estimated loss to her earnings is significant.

Pound, WADA’s head between 1999 to 2007, commented Sharapova had made a ‘big mistake’ and ‘should have known’ the consequences of using the substance that became banned from use for all sportsmen and women on January 1, 2016.

After much investigation WADA deemed meldonium to possess performance-enhancing properties. It is believed to have a positive effect on stamina and endurance because it has the ability to increase oxygen movement to muscles.

“Anytime there is a change to the list, notice is given on 30 September prior to the change,” said Pound. “You have October, November, December to get off what you are doing.

“All the tennis players were given notification of it and she has a medical team somewhere. That is reckless beyond description.”
Sharapova will be provisionally suspended from Saturday, March 12 and could potentially face up to a four-year suspension from competitive tennis. However Pound pointed out any ban could be reduced if “there is absolutely zero fault on the part of the athlete”.