Posted by TennisNews.com on March 11, 2016 in Business News 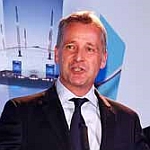 The ATP Board of Directors has appointed Chris Kermode as ATP Executive Chairman & President for a second consecutive term, the ATP announced on Thursday.

Kermode began his first three-year term in the role of ATP Executive Chairman & President in January 2014, and the extension now sees him working through 2019. During his initial term, Kermode has overseen significant growth for the ATP. Only last year, an all-time record 4.5 million fans attended ATP World Tour events, while more than 1 billion television viewers tuned in throughout the season.

“I’ve taken great pleasure in leading the ATP since 2014, and I’m delighted to continue in my role as Executive Chairman & President,” said Kermode. “I’d like to thank the Board of Directors for its vote of confidence and support as we look to continue to maximise growth opportunities in the years ahead. Just as importantly, I look forward to working with the other governing bodies of tennis to continue to protect the integrity of our sport.”

In securing long-term prize money agreements and calendars through 2018, Kermode has successfully delivered stable and sustainable outcomes for the Tour on two of its most decisive matters. Prize money levels on the ATP World Tour are set to reach a record US$ 135 million by 2018.

Kermode has also been instrumental in overseeing a period of unprecedented growth in commercial sponsorship for the ATP World Tour. In 2015, the ATP secured US$ 160 million in new sponsorship revenue over the next five years, including a five-year partnership with award-winning airline Emirates as the Tour’s Premier Partner.

Roger Federer, the longest-serving ATP World No. 1, said, “Chris has done an excellent job and shown great leadership since heading up the ATP. The Tour is in great shape and I’m pleased to see that he will serve a second term.”

Kermode has also prioritised the lower levels of professional tennis in recent years, overseeing a long-term plan to implement a number of enhancements on the ATP Challenger Tour. Minimum prize money levels on the Challenger Tour are set to reach US$ 50K (+ Hospitality) by 2017, while a number of investments are being made to ensure improved tournament swings, enhanced officiating and player services, and greater marketing.

Justin Gimelstob, ATP Board Player Representative, said: “Chris has done an excellent job as the head of ATP. The Tour is in great health, and today’s announcement provides stability and continuity at the helm of the organisation – an important consideration for the Board.”

Mark Webster, ATP Board Tournament Representative, said: “The Tour has achieved multiple successes under Chris’ leadership since 2014. We look forward to continuing our work together as we set out a long-term vision for the Tour through 2019 and beyond.”

Kermode will continue to be based out of the ATP’s office in London.