Maria Sharapova Uses Facebook To Reveal Her Response To Charges Against Her
March 14, 2016
Notice: Undefined variable: page_title in /home/tennisne/public_html/wp-content/themes/dante-child/single.php on line 205

Posted by TennisNews.com on March 14, 2016 in Tennis News 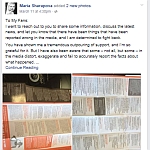 Maria Sharapova has taken to her Facebook to inform her 15 million followers of factual errors she feels are clouding public perception of her anti-doping ban case. The five-time grand slam event champion knocked down media reports that she was “warned” five times over a medication she was taking which was declared illegal at the start of the year.

The 28-year-old is awaiting the results of an investigation into her use of the now-banned Latvian medicine meldonium which she has taken since 2006 on prescription from her doctor. “I am determined to fight back,” she wrote. “A report said that I had been warned five times about the upcoming ban on the medicine I was taking. That is not true and it never happened.”

Sharapova called the reports “a distortion of the actual ‘communications’ which were provided or simply posted onto a webpage. I make no excuses for not knowing about the ban. I already told you about the December 22, 2015 email I received. Its subject line was “Main Changes to the Tennis Anti-Doping Programme for 2016.” I should have paid more attention to it.” She said the other ‘communications’ were “buried in newsletters, websites, or handouts.”

The biggest earner in all of women’s sport added that getting to the pertinent information on substance news required negotiating an online obstacle course. “In order to be aware of this “warning”, you had to open an email with a subject line having nothing to do with anti-doping, click on a webpage, enter a password, enter a username, hunt, click, hunt, click, hunt, click, scroll and read.

The ponderous, heavy-handed and low-tech approach apparently used by the ITF and the anti-doping enforcement regime of WADA will surely be fodder for Sharapova’s lawyers in a hearing as the bombshell case moves along.

“I’m proud of how I have played the game. I have been honest and upfront. I won’t pretend to be injured so I can hide the truth about my testing,” Sharapova added.