Sharapova To Launch Chocolate Line May 4

Posted by TennisNews.com on March 17, 2016 in Business News 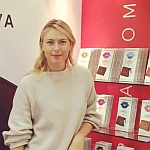 The chocolate version of the high-end Sugarpova line will go into shops around the globe in May just before the start of the French Open.

While some major sponsors have deserted the top-earning woman in all of sports over her controversial long-term use of the recently banned Latvian medicine meldonium, the chocolate manufacturer producing the line of sweets for the five-time grand slam event champion’s marque has given its support.

Other sponsors, including Evian, skincare product Supergoop are withholding judgment on the case, which will surely end up in a court of law due to some of it’s more murky aspects of exactly when and how players were told of the upcoming instant-ban as the med went from legal to not legal in the space of a day.

Baron Chocolatier has come out in Sharapova’s corner, joining racquet manufacturer Head in backing the 28-year-old in her moment of distress. Meldonium was totally legal until January 1 when antidoping czars added it to the banned list.

With claims from the bureaucracy that five notifications were sent to player in December, Sharapova said that neither she nor her team saw any of them, buried as they were inside webpages or deep in pdf files.

“Maria has been a role model for millions of people and she is a woman of integrity,” Christopher Mattina, Baron Chocolatier’s senior vice-president, told the Guardian. “We think she made an honest mistake and she deserves credit for being open and direct about it. We hope she will be allowed to play tennis again but no matter what, we are proud to stand by Maria and to support her in this venture.”

Sharapova is branching out into the world of high-end chocolate after three years of success with boiled gummy sweets. The company hopes to treble sales to around $20 million per annum with the addition of the chocolate drawcard.

Sharapova’s sweets are sold in more than 20 nations, mainly at upscale shops and boutiques; Sharapova remains the sole owner of the firm she financed herself with a reported seven-figure kickstart four years ago.