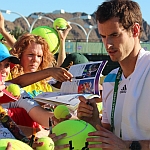 Andy Murray is the second-richest athlete under 30 years of age in Britain, according to the Sunday Times annual ‘Richest Young Sportsmen’ ranking.

The newspaper put Andy and Jamie Murray in No. 2, putting their assets at 58 million pounds. However, Andy’s wealth account for 57 million pounds, which would have put him at No. 2 by himself.

The collective Murray amount was estimated to be 10 million pounds higher than a year ago. That is the same increase as Rooney but less than the 18 million increase for McIlroy, and the third-highest among the top ten. In addition to his prize money, Murray has a select amount of sponsorship deals and also owns an upscale 15-bedroom hotel in Scotland, Cromlix House.

But his newest venture is aimed at making money for charity, with the socially conscious player starting an exhibition event, ‘Andy Murray Live,’ to be played on the 21st of September. It will be played in Glasgow, and benefit two charities. “I owe it to my fans who have supported me throughout the years and what better way than to play in front of them at The SSE Hydro whilst raising money for Young People’s Futures and UNICEF,” said Murray in a release.

The event has a presenting sponsor, SSE, with an executive saying, “We are proud to be partnering with ‘Andy Murray Live’, which will see world-class tennis played at The SSE Hydro for the very first time.  The success Andy has had on and off the court is unprecedented and he is a wonderful ambassador for British sport. We’re looking forward to what promises to be an incredible event, and we’ll also be offering our customers the chance to win some incredible experiences ahead of the day.”

While younger brother Andy has two Grand Slam singles titles and a career-high ranking of No. 2, Jamie is ranked No. 1 and has a Grand Slam mixed doubles and a Grand Slam doubles title. The pay gap, however, is substantial — Andy has earned $43 million in his career, while Jamie has $2.15 million in career earnings.