Goffin Is Signing More Sponsors As His Ranking Rises

Goffin Is Signing More Sponsors As His Ranking Rises
May 1, 2016
Notice: Undefined variable: page_title in /home/tennisne/public_html/wp-content/themes/dante-child/single.php on line 205

Posted by TennisNews.com on May 1, 2016 in Business News, Headline 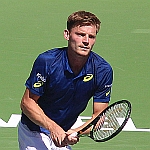 Belgium’s David Goffin is signing up yet more sponsors as he approaches the top 10, having just announced a contract with Olympia, a banking and financial company.

The 25-year-old has secured multiple deals with both Belgian and international companies since his breakthrough in 2012, including new clothing sponsor Asics and Peugeot, but is an even bigger figure in his country since leading it to the Davis Cup finals. Goffin also reached the semifinals of Indian Wells, and then repeated the showing at Miami, a run that has taken him into the top 15.

That prompted Tomas Van Den Spiegel, a former basketball player now employed by Olympia, to call Goffin one of the country’s “top exports.”

“I am very happy to have such an ambassador as him, and to know what an extraordinary person he is,” Van Den Spiegel said to RTBF, having helped strike the deal.  “David also represents the whole country. He is a French speaker, but also an international personality. As a good communicator, very useful to us.”

Goffin announced the deal on social media, promoting the bank’s financial products with the line, “success starts with a plan.”