Posted by TennisNews.com on November 10, 2016 in Tennis News 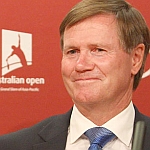 Tennis Australia President Steve Healy has been re-elected unopposed for a third term until 2019.

Healy commenced in the role in October 2010 and has overseen the biggest growth period in the history of the organisation with a mandate to accelerate the expansion of tennis across the nation.

“It’s a great honour to have the opportunity to continue to serve the tennis community and grow our great sport for a further three years,” Healy said.

“Tennis Australia has a global reputation for innovation, from developing grassroots participation programs such as ANZ Tennis Hot Shots, to the way we present, broadcast and promote our major events, including the Australian Open. It’s vital to seek new ways of attracting and keeping more people in our sport, whether they are active participants, fans attending our events, watching on TV or following online.

“Over the next three years I’m looking forward to working with the Board, State and Territory Member Associations, management and staff to build on our already solid foundation and continue to improve the health of our sport, which has the flow on effect of contributing to the health of our nation.

“Record participation numbers, dedicated investment in facilities across Australia, the creation of inspiring event content and on court successes are the result of our team’s passion, drive and dedication to ensure the success of our sport.

“A recent ITF survey on tennis participation reported we have 2.1 million Australians playing tennis, with 290,000 of those players having taken up the game within the past 12 months.

“Our hugely successful ANZ Tennis Hot Shots program continues to play the critically important role of introducing our youngest Australians to the sport, with a nine percent participation increase this year alone and a presence in more than 1500 schools.

“The pilot program for our Book a Court initiative, which uses innovative technology to make courts more easily accessible for players is up and running across 20 clubs in Victoria and has resulted in more than 10,000 court bookings and increased club revenue. The feedback from clubs, players and administrators has been extremely positive and we look forward to rolling the program out across the country.

“The growth of our sport would not be possible without developing and maintaining great facilities. In the last financial year we’ve not only supported the construction and redevelopment of tennis facilities nationwide, but have triggered stakeholder investment to the turn of $34.4 million, resulting in 327 new or resurfaced courts, and 187 ANZ Tennis Hot Shots courts.

“The Australian Open continues to grow and set new benchmarks in quality, entertainment, value, attendance, global viewership and prize money. We’ve begun our biggest ever inbound tourism push, with Australian Open launches being staged for the first time in Tokyo and Singapore, along with Shanghai, as we continue to grow the Grand Slam of Asia Pacific.

“As we reflect on these achievements, and the healthy state of the sport in Australia, the Board and I are determined to look forward, to innovate and constantly improve.”

The Tennis Australia Board now comprises: