Sharapova’s Sugarpova Is Getting Bigger And Bigger

Sharapova’s Sugarpova Is Getting Bigger And Bigger
November 1, 2015
Notice: Undefined variable: page_title in /home/tennisne/public_html/wp-content/themes/dante-child/single.php on line 205

Posted by TennisNews.com on November 1, 2015 in Business News 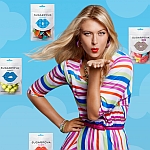 Maria Sharapova is back on court and winning at the WTA Finals at Singapore, but still also juggling her considerable array of business and sponsorship activities.

Well-known as the highest-earning female athlete with estimates of more than $23 million annually in off-court income, Sharapova did promotional appearances for sponsor Porsche before the WTA Finals.

But the Russian’s most personal venture, her candy company, Sugarpova, is now too big for her and agent Max Eisenbud to run themselves. Starting with just a few varieties when she launched it in 2012, it has expanded its offerings and now is sold in 32 countries through 23 distributors, and has been featured through pop-ups at Grand Slam cities and a special exhibition at Bloomingdale’s in New York.

According to Forbes, Sharapova and Eisenbud hired Marvin Traub Associates to manage the company and market the product.