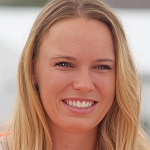 Caroline Wozniacki hasn’t decided whether or not she will continue with Lagardere. Apparently, Wozniacki was upset when Lagardere fired four agents, including John Tobias, who has been working with the former No. 1 for years.

“We were very surprised,” said Piotr Wozniacki, the father of Caroline.

In an interview with Ekstra Bladet, Piotr Wozniacki said that they were surprised that Tobias had been let go.

“It came very unexpectedly,” he said. “Caroline is of course disappointed, because John was almost a member of the family. But we have to respect that things happen in this world, and now we’re waiting for Lagardere’s move.”
Piotr Wozniacki said that another agent who is still working on Lagardere has called them and talked with them, but they haven’t decided where they will stay.

“They explained to us about a new structure and new, big thoughts, and now we’re waiting for their proposal,” Piotr Wozniacki said. “But it’s clear that Caroline must have one person attached to her, someone capable who can take care of her interests in a responsible fashion.”

Following the agency’s dismissal of division president Tobias three weeks ago, it emerges that others agents like Sam Duvall, Meilen Tu and Stuart Duguid, also left the company.

The agent Julien Cassaigne is the  new senior vice president at Lagardere.