Posted by TennisNews.com on November 3, 2015 in Headline, Tennis News 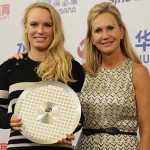 The Women’s Tennis Association (WTA) announced today that World No.17 Caroline Wozniacki has received the 2015 Diamond Aces Award, an award presented to the player who consistently goes above and beyond in promoting the sport of women’s tennis to fans, media, and local communities by performing off-court promotional and charitable activities.

This year marks the ninth season in a row that a point weighted system was used to award each of the off-court activities performed by players at WTA tournaments. This is the second time Wozniacki has won the Diamond Aces Award, she also won it in 2011.

“Caroline Wozniacki is a great champion on and off the court,” said WTA President Micky Lawler. “What she does to make tennis impactful is remarkable and so generous. She is such an exceptional human being, which she has demonstrated by winning the Diamond Aces Award twice already. Congratulations to Caroline, and thank you for everything she does to enhance the tour and live by the values the WTA stands for.”

“Thank you for this award,” said Wozniacki. “It’s a great honor and I take great pride in being a role model to everyone. It’s an honor to win this for the second time and hopefully I can win it again – but if not it means there are youngsters coming up or other girls on the tour who are doing a great job of giving back. I’m proud of everyone out here and happy we can promote our sport – make everyone aware that we’re here and women’s sport is important.”

Wozniacki was presented with the award during an on-court ceremony at the Huajin Securities WTA Elite Trophy Zhuhai.