Posted by TennisNews.com on February 10, 2016 in Headline, Tennis News 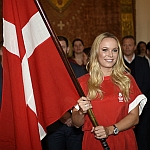 Caroline Wozniacki is going to carry the Danish flag at the entry of the Olympics in Rio. The announcement took place on Friday afternoon at a press conference at the Copenhagen city hall.

When the Danish Olympic team will enter the Estádio do Maracanã in exactly six months, on the fifth of August 2016, it is going to be with Caroline Wozniacki at the front. The 25-year-old tennis player was presented as the Danish Standard bearer on Friday afternoon. It took place at a press conference at the Copenhagen city hall, where H.R.H Crown prince Frederik handed her the flag.

”It is an honor for me. The Olympics really means a lot to me, and I have amazing memories from my previous two Olympic participations. I am enjoying being a part of the Danish team, and feeling the team spirit that I normally do not experience every day. To carry the flag in Rio will be one of the highpoints of my career and it will be something that I will never forget,” says Caroline Wozniacki.

Danish National Olympic Committees, Olympic-head of mission, Morten Rodtwitt, is looking forward to experiencing Caroline Wozniacki at the front of the Danish team.

“Caroline is one of the most successful tennis players throughout the past ten years, and she has achieved results in a global type of sport where the completion is extremely tough. Furthermore, she has millions of fans around the world because of her smiling and forthcoming. Caroline is an amazing ambassador for Denmark, and therefore she is a female athlete that we would like to identify with, and be represented by,” says Morten Rodtwitt, and continues.

“Caroline has previously participated in two Olympics, in Beijing and London, and both times she has truly acted as a team player. Being smiley and social and always interested in how the other athletes on the team are doing. There is always a positive mood where she is. Those are qualities that goes well with being a standard bearer.”