Nadal Said He Expected To Make The Field At The O2

Nadal Said He Expected To Make The Field At The O2
November 4, 2015
Notice: Undefined variable: page_title in /home/tennisne/public_html/wp-content/themes/dante-child/single.php on line 205

Posted by TennisNews.com on November 4, 2015 in Tennis News 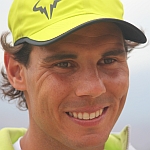 Rafael Nadal has remained optimistic throughout one of the most depressing years of his career, with the Spaniard saying he still never doubted that he would make the field for the eight-man World Tour Finals later this month In London.

“I always believed that I was gonna be in the top eight at the end of the season,” said the seventh seed at the Paris Masters. “I’m humble enough to say, ‘If I keep playing bad, it’s probably gonna be trouble,’ but I had the feeling in some moments that I gonna play better. I always thought that I gonna qualify, but a few months ago I was not enjoying (my tennis).”

“I believe my level is to be there in the top eight, so even if I had the tough moments this year, the year is long, and the normal thing is you have some good weeks to qualify for it (London finals).”

Nadal has ended a major slump which robbed him of form and mental strength. But, two finals (Beijing, Basel) from his last three events have gotten most of his mojo back.