Nadal Sees Zverev As Number One In The Future

Nadal Sees Zverev As Number One In The Future
March 17, 2016
Notice: Undefined variable: page_title in /home/tennisne/public_html/wp-content/themes/dante-child/single.php on line 205

Posted by TennisNews.com on March 17, 2016 in Tennis News 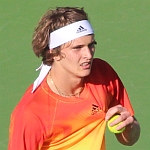 Rafael Nadal is not a man prone to exaggeration but after facing a match point against the 18-year-old German Alexander “Sascha” Zverev he is acutely aware tennis has another major star in the making.

Even before the pair’s 6-7, 6-0, 7-5 battle at Indian Wells’ BNP Paribas Open, the Spaniard who spent 141 weeks as world no.1 stressed a belief that Zverev has the quality and game to one day reach the top spot himself.

“He is amazingly talented,” said Nadal. “He is probably going to be the number one in the world.

Nadal admitted Zverev’s serve is a weapon that can already be viewed amongst the very best.  “Second serve I decided to go back three, four meters behind the baseline,” he said.

Zverev, who stands 6ft 6ins tall and became aware of the demands of a top-flight player from his elder brother on tour Mischa, who rose to world no.45 eight years ago, reached led 5-3 and 40-30 in the final set, only to make three straight unforced errors.

And the teenager woefully admitted: “On match point I sucked.”

Nadal now goes through to meet Kei Nishikori and could face another meeting with current world no.1 Novak Djokovic in the semi-final. Yet his mind was still very much on overcoming Zverev and he stressed: “Is a great victory and I’m very happy about it.