Posted by TennisNews.com on November 12, 2015 in Business News, Headline 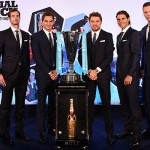 Players were welcomed to City Hall for the Official Launch, presented by Moët & Chandon, where the singles and doubles draws took place for this year’s tournament, due to get underway on Sunday.

During the evening, Kermode confirmed that the tournament would remain at The O2 in London through to 2018. “We are delighted to have reached an agreement which will see the tournament celebrate its 10th successive year in London in 2018,” said Kermode. “The tournament has been a spectacular success since moving to The O2 in 2009, generating record crowds, incredible atmospheres, and a soaring worldwide TV audience which broke the 100 million mark for the first time last year.

“The O2 has enabled us to present the sport in a new and vibrant way, in a media-friendly time zone, and in one of the world’s greatest cities,” continued Kermode. “For us, there is currently no better place to stage our season-ending event.”

The ATP’s crown jewel event has been staged in London since 2009, welcoming more than 1.5 million fans The O2 arena across the past six years. In 2014, the tournament set an all-time attendance record of 263,560, the most in the 45-year history of the tournament.

The Mayor of London welcomed news of the event staying in the capital for a further three years. “I am a huge tennis fan and as Mayor am immensely proud to see the phenomenal success of the Barclays ATP World Tour Finals here in London, underlining our city’s status as the home of sport,” said Johnson. “What’s not to love about having the best men’s tennis players in full flight at one of the world’s greatest venues? It’s an event that attracts hundreds of thousands of fans each year and I am thrilled that the capital is to continue hosting what has become one of the highlights of the sporting calendar.”

The O2 is the world’s leading music and entertainment venue, welcoming over nine million visitors annually. Since opening in 2007, the venue has welcomed more than 60 million visitors.

Alex Hill, Chief Operating Officer of AEG Europe, said, “We are delighted that the Barclays ATP World Tour Finals will remain at The O2 until 2018. London is the perfect city to host the elite players of world tennis, with a fan base that is second to none. Nothing beats the atmosphere of a UK crowd and we know The O2 is the right venue to ensure this event continues to be such a global success. The ATP’s season finale is undoubtedly one of the most successful events we host throughout the year, and I look forward to even more great tennis in London.”

Tracey Crouch, Minister for Sport, said, “The Barclays ATP World Tour Finals have been a fantastic success in London and I am delighted that it will continue to be hosted in the capital. Staging this tournament featuring the very best players in the world not only provides an important boost to the local economy but can also help inspire future generations of tennis players, therefore growing the sport in Britain.”

Barclays’ title sponsorship of the season-ending event will run through 2016. The tournament has been contested in major cities around the world with a rich history dating back to the birth of The Masters in 1970 in Tokyo. Since 2000, the event has taken place in cities such as Lisbon, Sydney and Shanghai, before moving to London in 2009.