Posted by TennisNews.com on December 10, 2015 in Business News, Headline 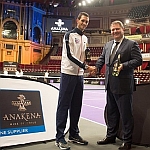 British winemaker Accolade Wines has signed up to be a sponsor of the Lawn Tennis Association.

The company will use the partnership to promote its new South American label, Anakena, in a deal worth half a million Pounds. The agreement includes sponsorship of Queen’s and Wimbledon.

It is another indication of the increased national profile of British tennis following the country’s Davis Cup win, taking the reach of the sport further than the Wimbledon Championships.

That led the winery to select tennis to introduce its new acquisition. “This partnership is a fantastic opportunity for Anakena and we couldn’t be happier to be working alongside the LTA and British Tennis team,” said CEO Paul Schaafsma.

With Anakena,” he said, “we want to make sure there was consumer awareness for it.

“With England just winning the Davis Cup, I think tennis is very much top of mind for English people and having a partnership with the Lawn Tennis Association – we’re going to be the key wine sponsor at the Queen’s Club tournament – there’ll be an Anakena cellar door at the event, there’ll be an Anakena bar in the corporate hospitality and Anakena wines will be poured throughout the event.”

The company will be the official wine of the Lawn Tennis Association.